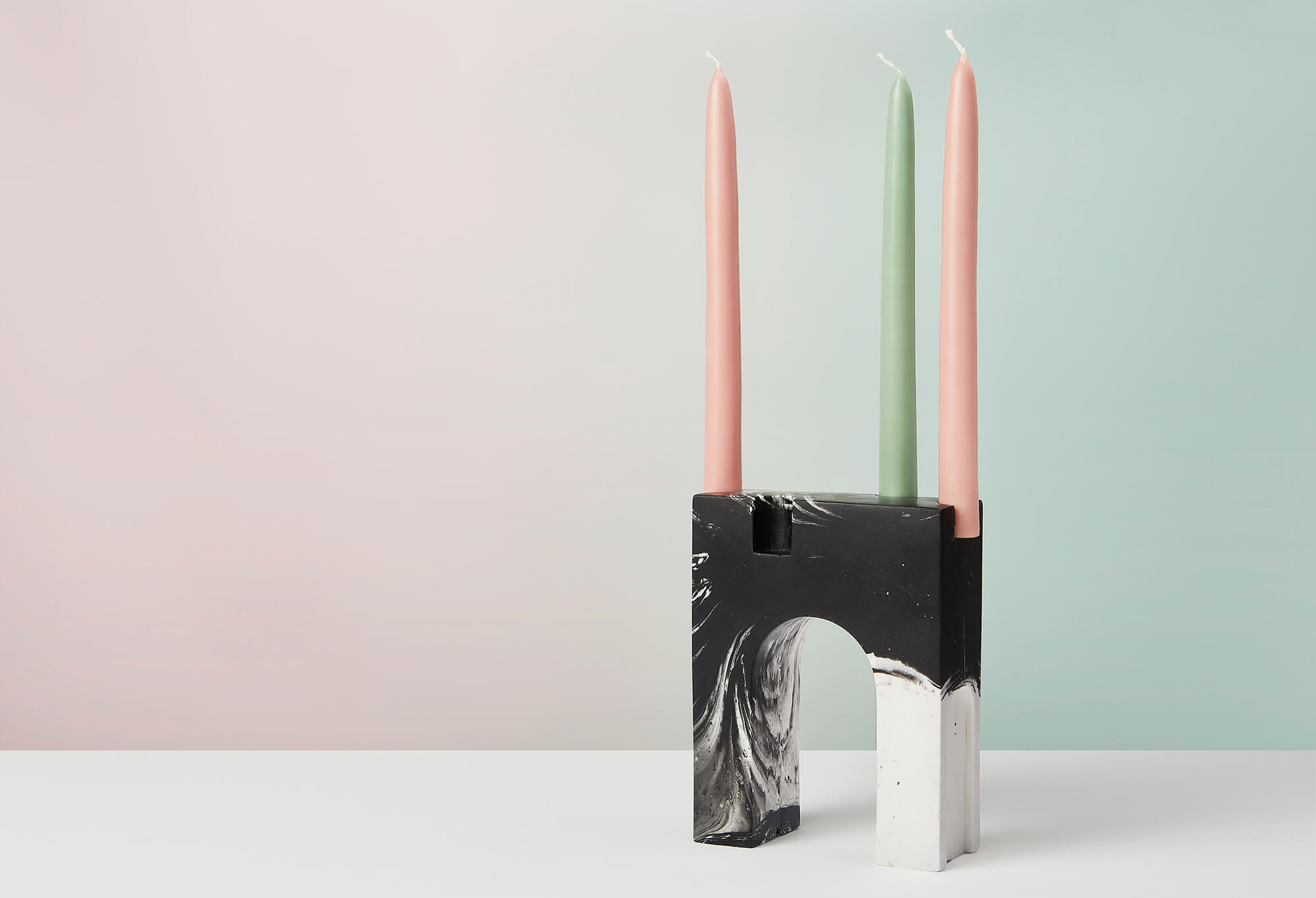 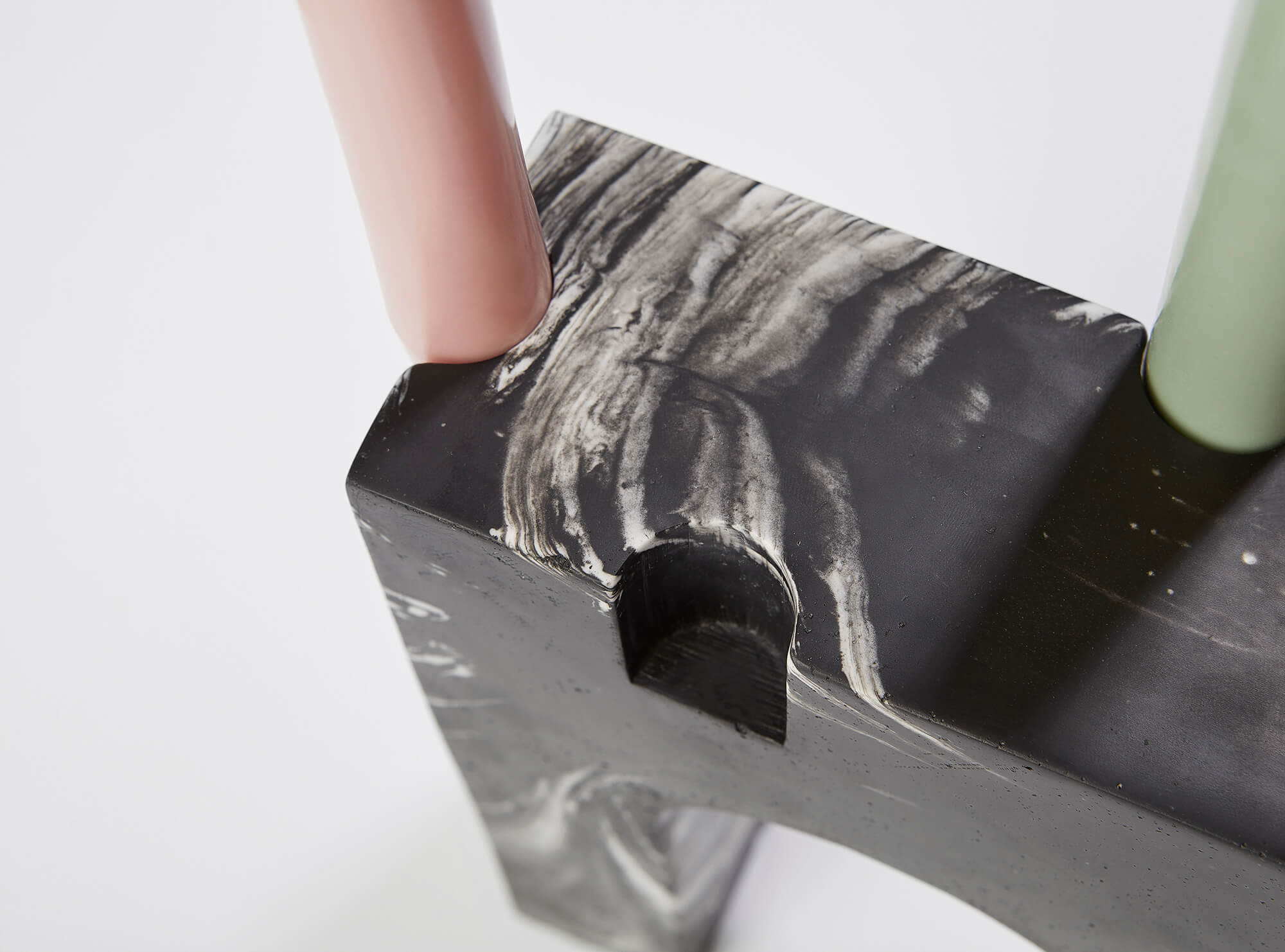 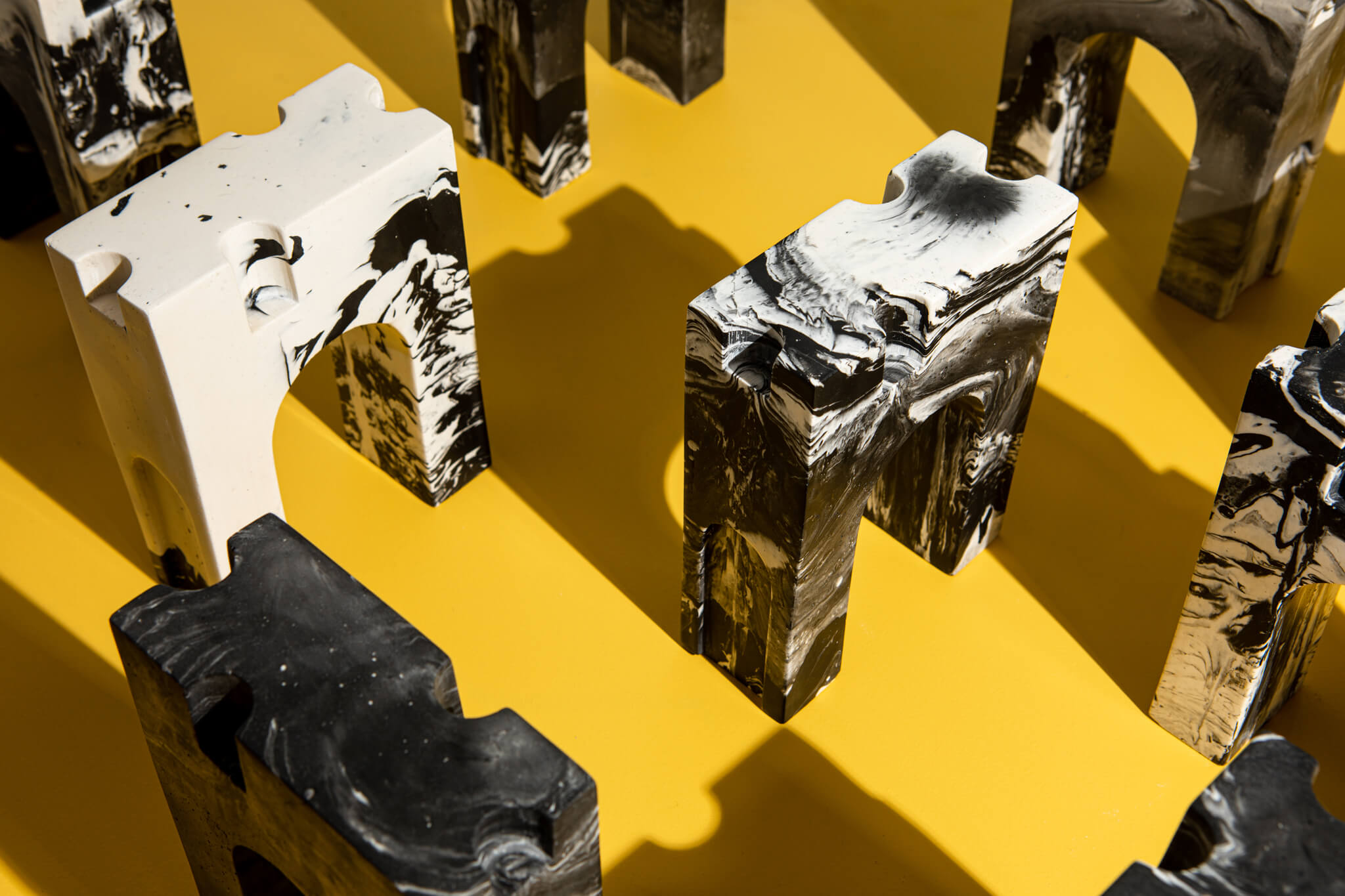 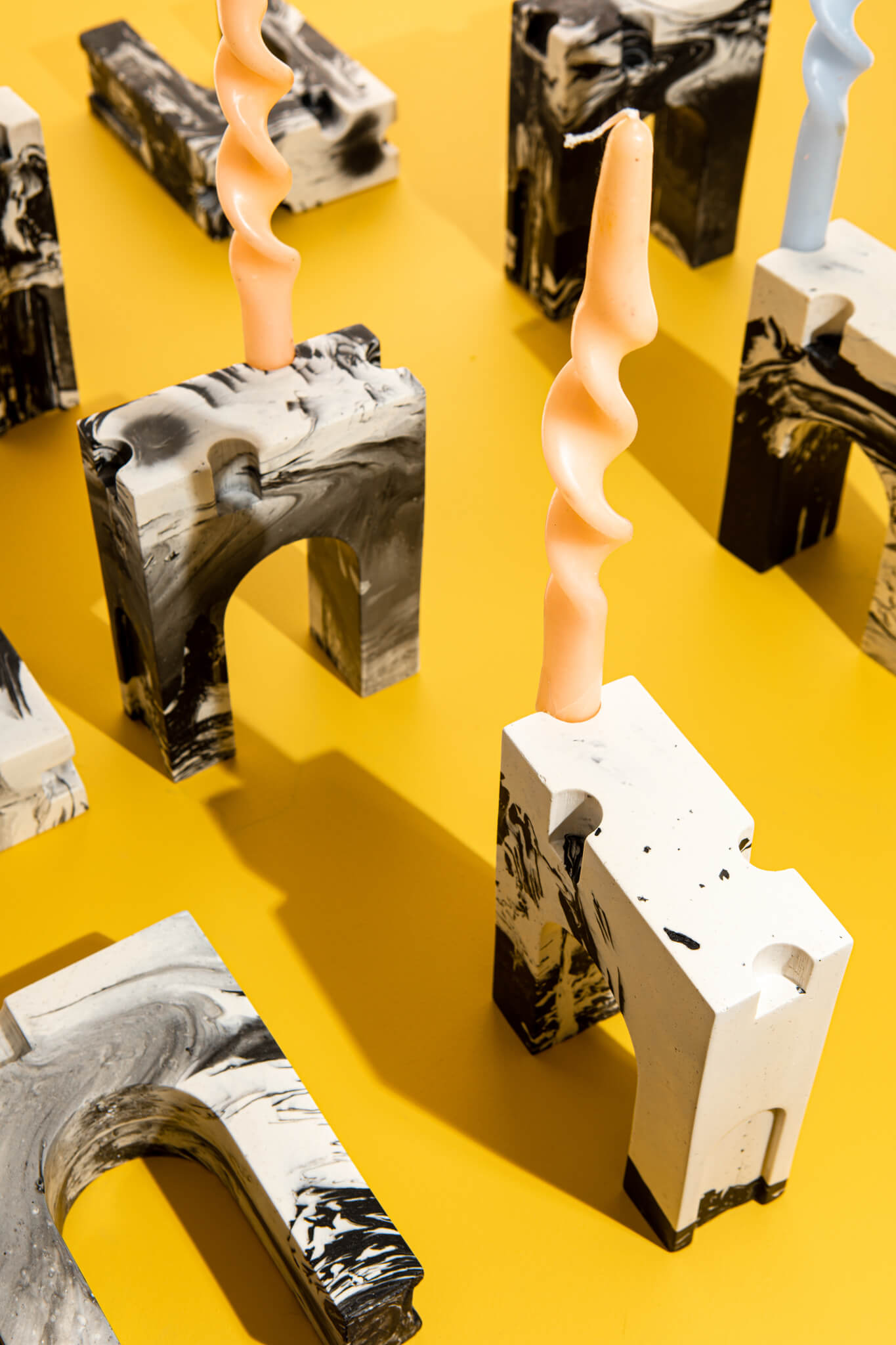 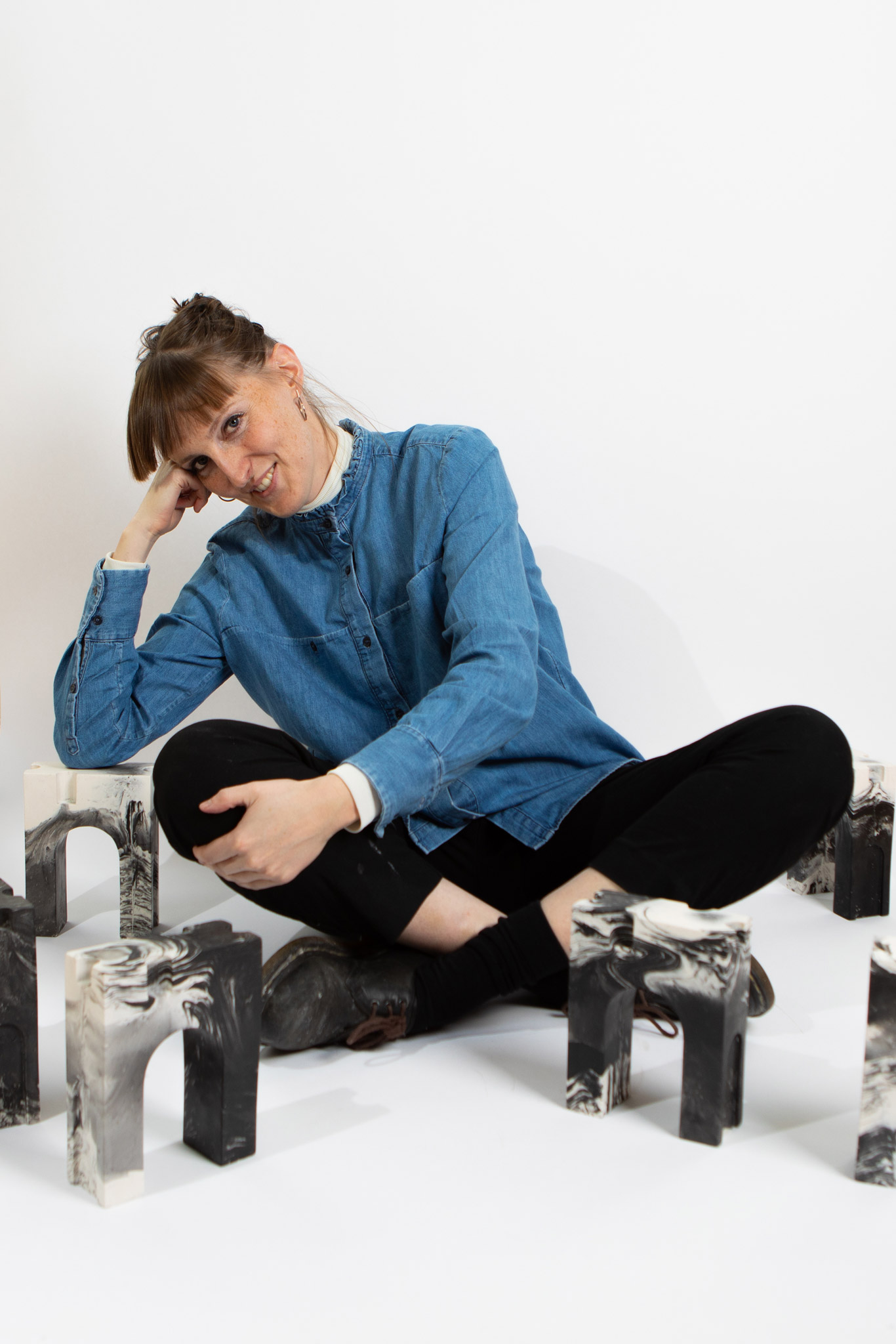 For the second consecutive year, the Scottish Album of the Year (SAY) Award 2020 Design Commission has been curated by Local Heroes. We invited Glasgow based designer and architect Rekha Barry to create Triumph, a marbled jesmonite trophy in the shape of an arch which also acts a candleholder.

Developed by The Scottish Music Industry Association, The SAY Award is one of Scotland’s most ambitious and lucrative arts prizes. With £20,000 awarded to the winning album and nine runners-up prizes of £1,000, The SAY Award champions the strength and diversity of Scotland’s musical output and the vital, enduring relationship it shares with the world of design.

Local Heroes curator Stacey Hunter said "This is our second year curating the Design Commission and I wanted to explore the idea of an item that was decorative, functional and luxurious. I asked Rekha to consider a new piece of work that could happily sit on the mantelpiece of the winning artists’ but could also be brought down to act as a centerpiece for a dinner party. With the candles in place it will create the perfect mood for an evening of conviviality. I think that helps to remind us that there are better days ahead where we can enjoy sharing music, food and each other's company again.”

“I wanted to create something which was a celebration of the musician’s achievements, and that felt great to hold but also was a functional piece of design anyone would be happy to have in the home."

"Thinking about how an artist might feel when they’ve been shortlisted for The SAY award, I immediately thought of triumph. A triumphal arch is a great reference for me as it is a piece of architecture and a sculpture at the same time. I would like to think that my designs can also be found between these two things. Coming from an architectural background, my first point of reference is always buildings. I am influenced by the forms and proportions of classical architecture and creating modern interpretations of these."

I was also inspired by The SAY Award 2020 host city of Edinburgh. Archways are the perfect motif for expressing this city and can be found everywhere. The material I use –jesmonite – when buffed and polished, gives an amazingly smooth stone-like feel which is representative of the city’s fabric.

The SAY Award is respected by artists, valued by the industry and is responsible for both a surge in musical discovery and an explosion of impassioned debate on social media. Placing artistic merit before sales history, genre or record label affiliation, The SAY Award dispenses with categorisation, opting instead for the creation of a bold, unifying platform from which Scotland’s most outstanding albums – across all genres – can be celebrated, discovered and championed.

Hilary Goodfellow Event and Supporters Manager at Scottish Album of the Year Award said:
“The SAY Award is a celebration of the incredible creative talent making music in Scotland, but of course it isn’t just music that Scotland excels at -  we are also a nation recognised internationally for outstanding creativity in art and design.  Since The SAY Award’s inception, we have sought out talented designers to create bespoke prizes for all our Shortlisted artists, and we are delighted to continue to partner with Edinburgh based design curators Local Heroes on our Design Commission.

This year, Local Heroes year introduced us to the work of architect and maker, Rekha Barry.  Rekha’s strikingly simple, monolithic design for this year's award is both functional and sculptural. Given the global climate crisis, we appointed Music Declares Emergency as our charity partner, and have embedded sustainability at the core of everything we do. Rekha was asked to give consideration to sustainability at all stages of the design and fabrication process, and we are delighted with how well her jesmonite sculptures fulfil the brief, with gypsum, the main material in jesmonite, being one of the world’s most abundant natural resources. We also extend our thanks to Sweetdram for their continued support which facilitates the Design Commission and enables us to continue to reward creativity with creativity.”

To attend this year’s virtual event broadcast from Summerhall in Edinburgh at 7pm on Thursday 29th October and to view the Scottish Album of the Year Award 2020 shortlist visit: sayaward.com

Rekha Barry is from Liverpool and moved to Glasgow in 2008 to study at the Mackintosh School of Architecture. After completing her diploma and a year of study at UdK in Berlin, she worked at Keppie Design and was an assistant to Turner Prize nominated artist Nathan Coley. In 2016, she moved to Anderson Bell + Christie Architects, an employee owned business and has been there ever since. Her work focuses predominantly on social housing and more recently, community-based work, such as an annexe for Community organisation Kinning Park Complex in Glasgow. Starting rekha_maker has allowed Rekha to explore architectural themes and fun sculptural designs on a small scale.