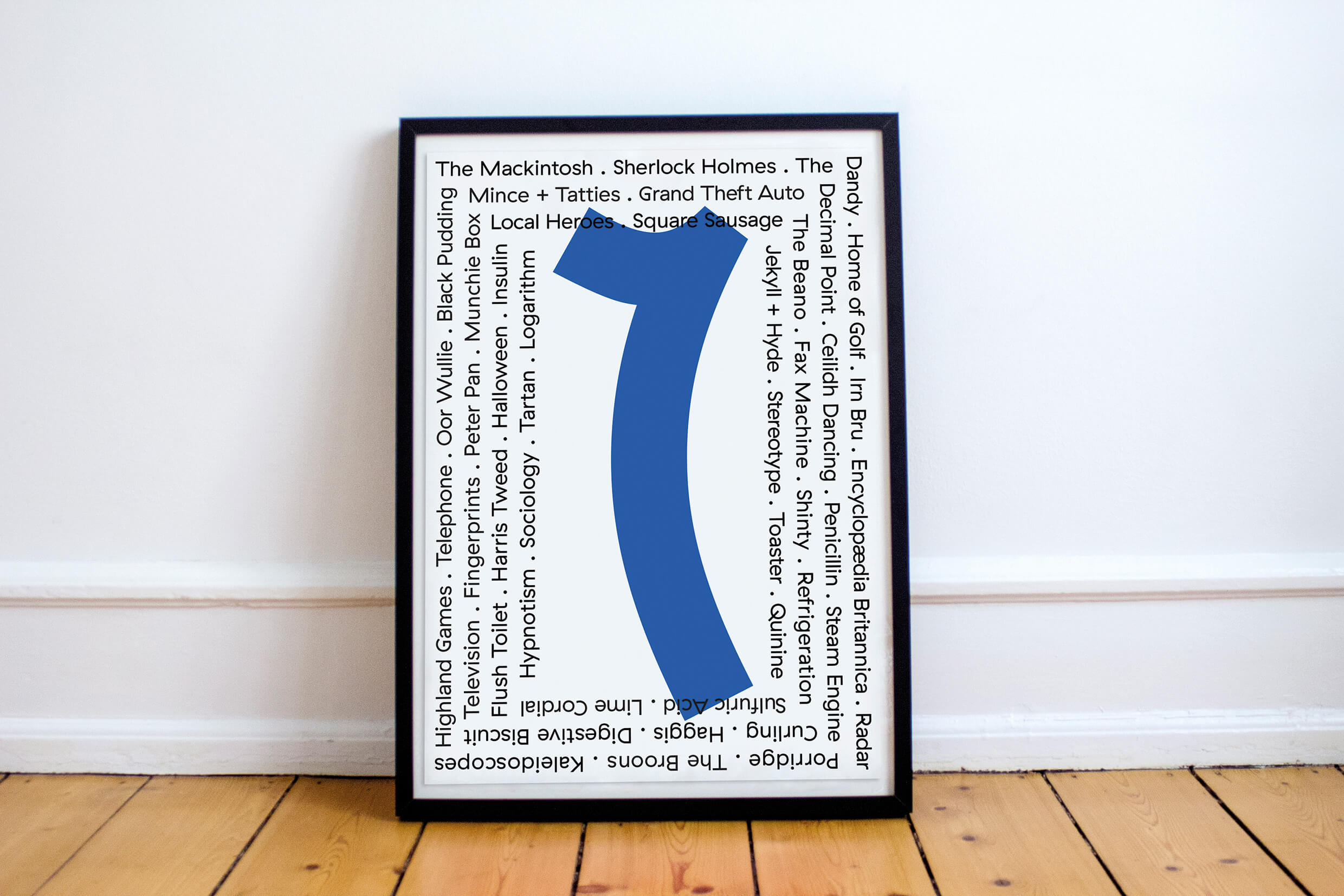 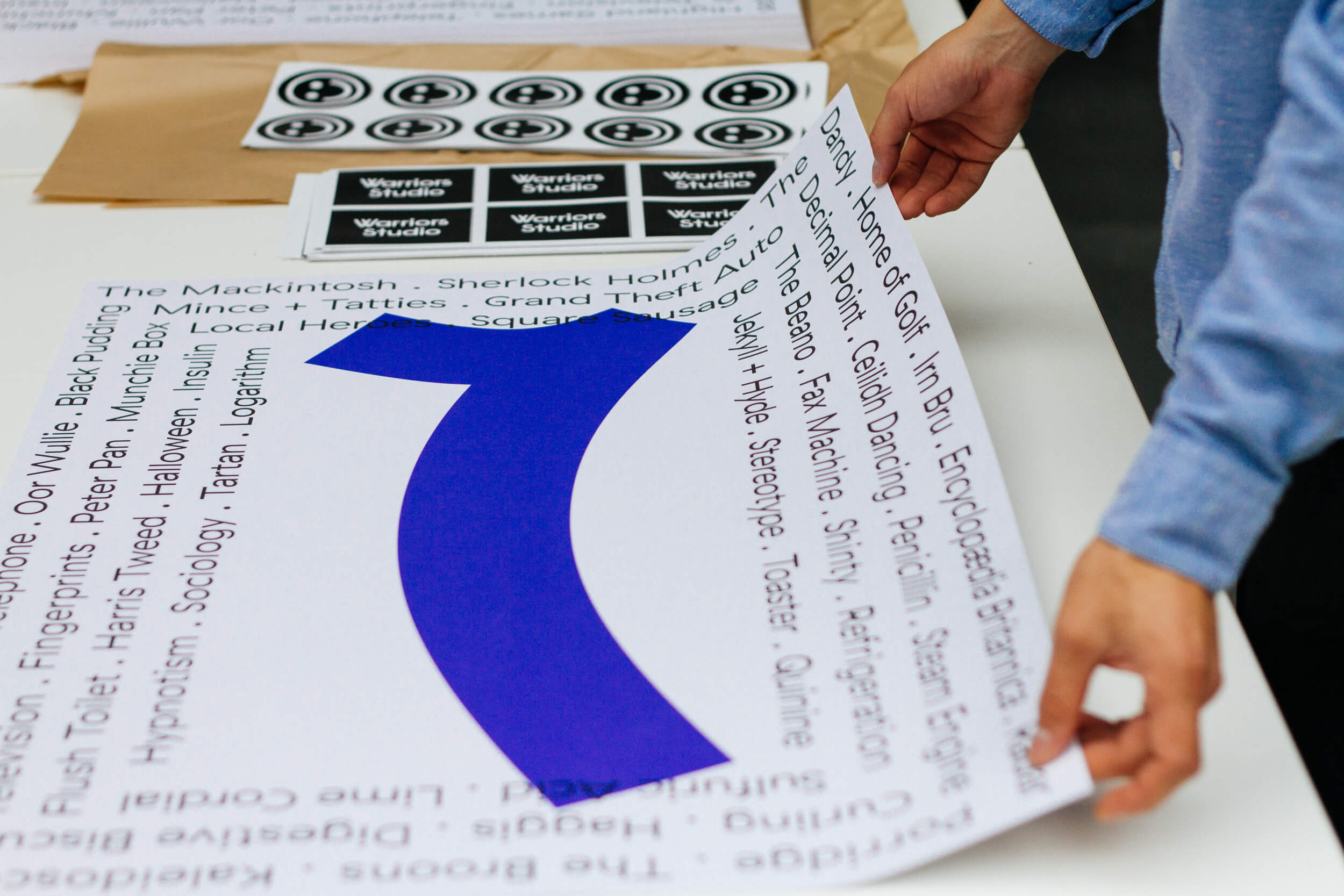 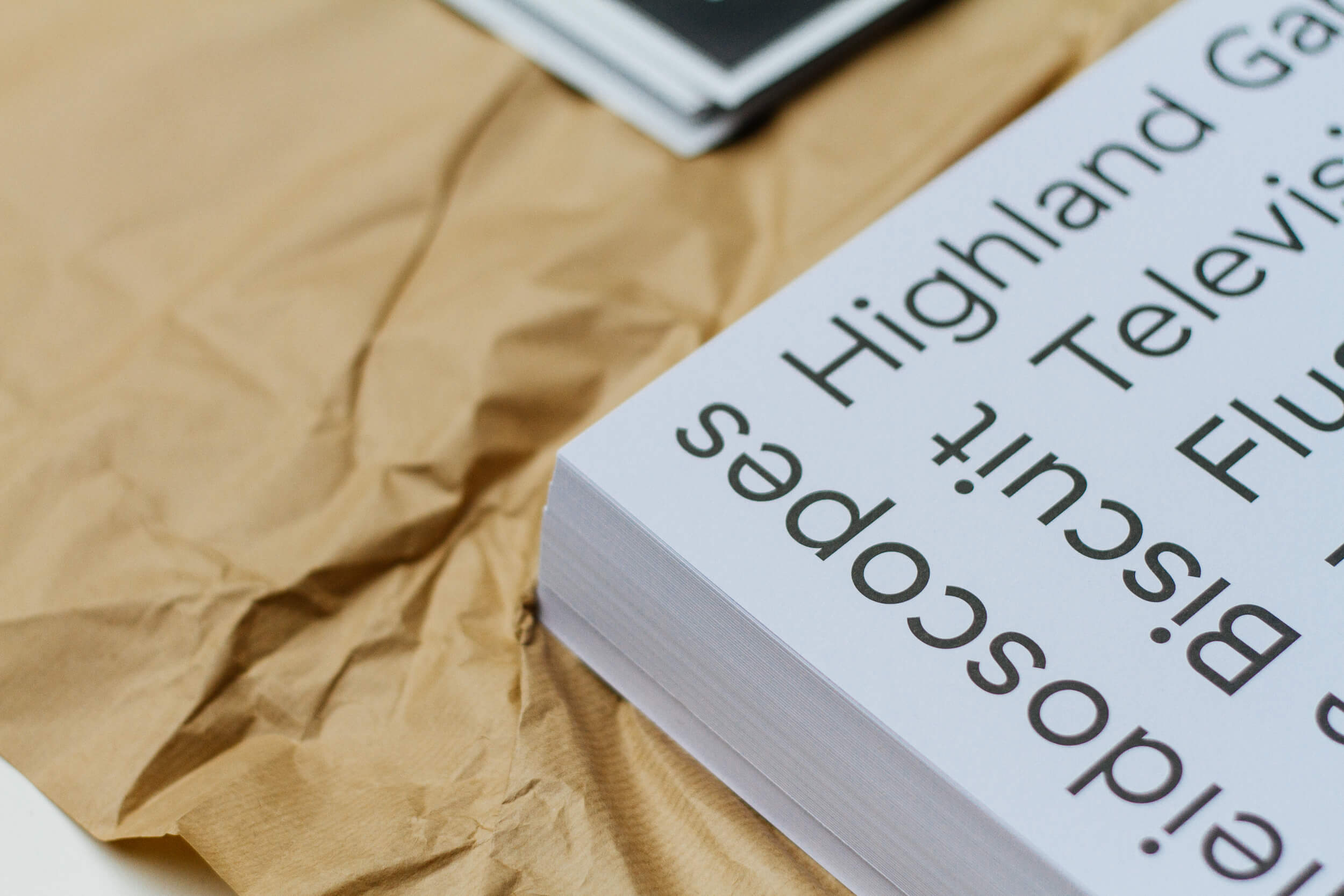 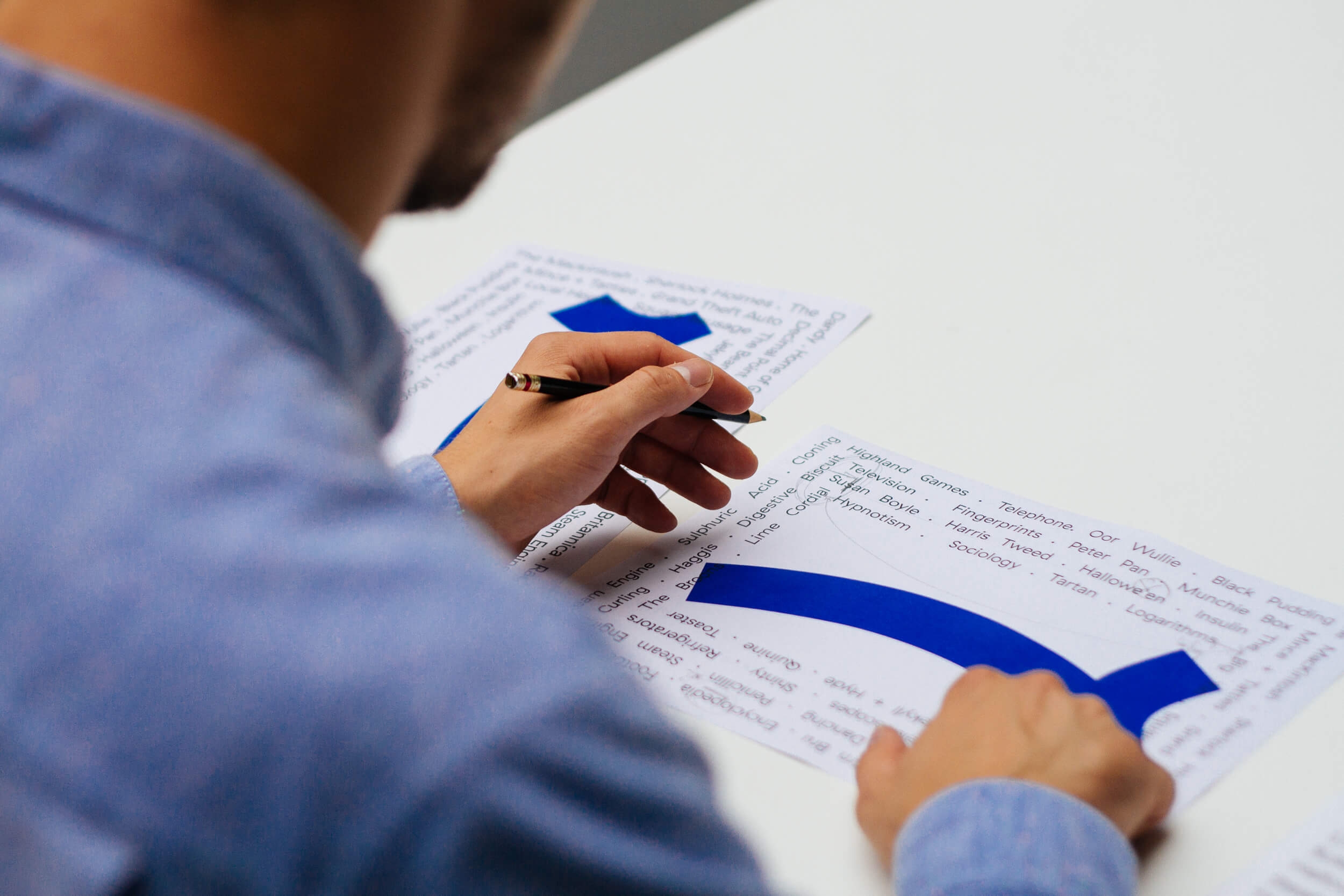 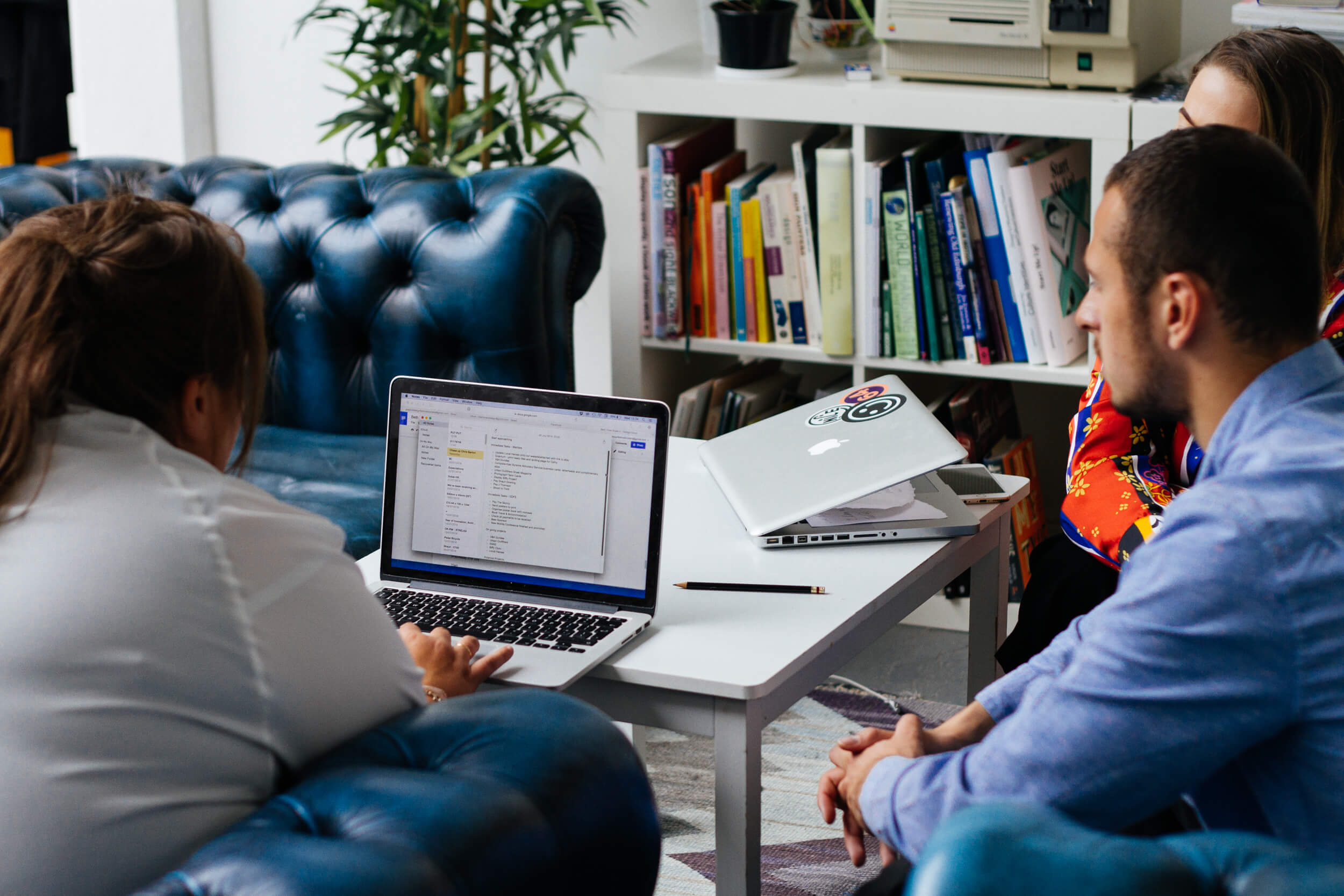 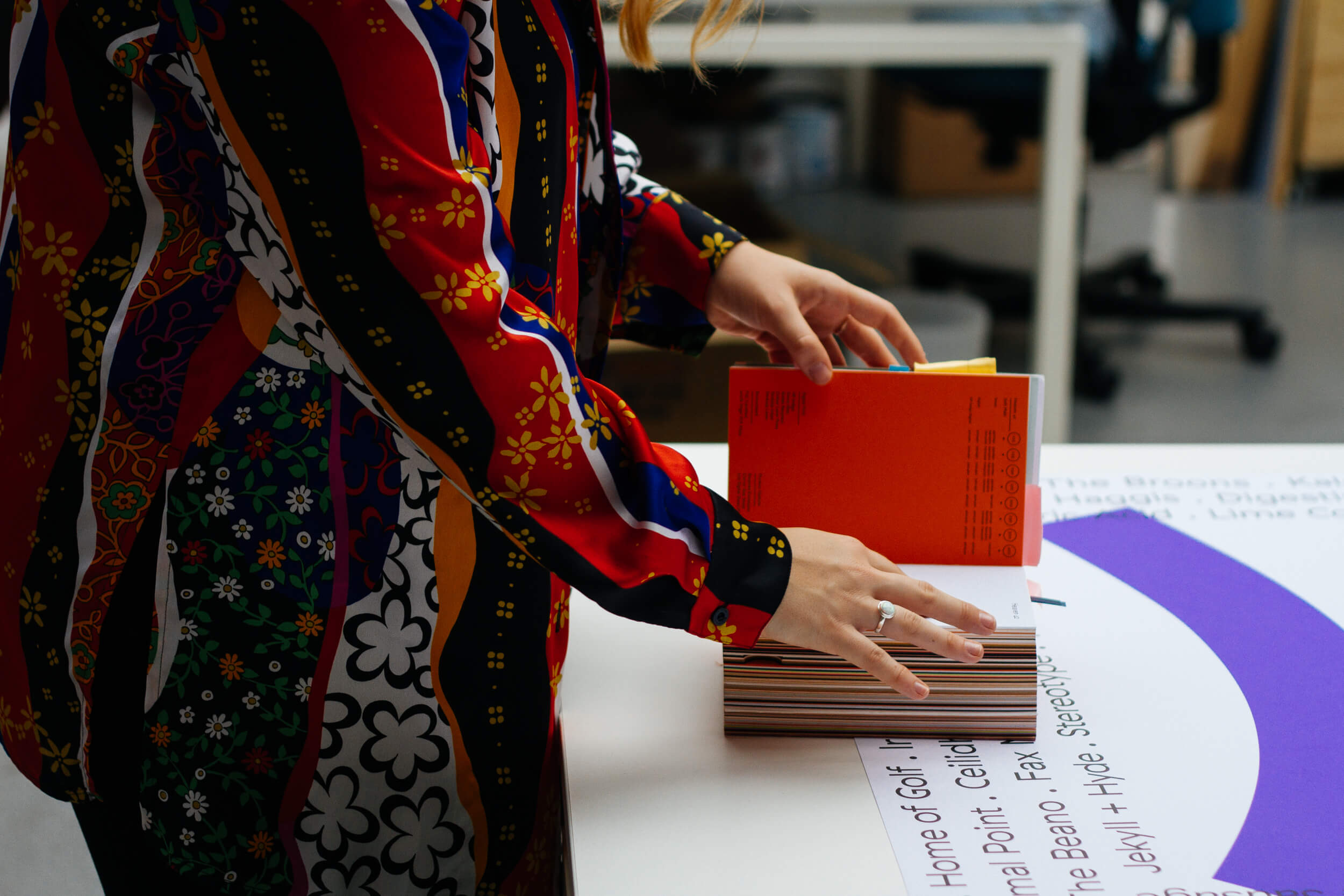 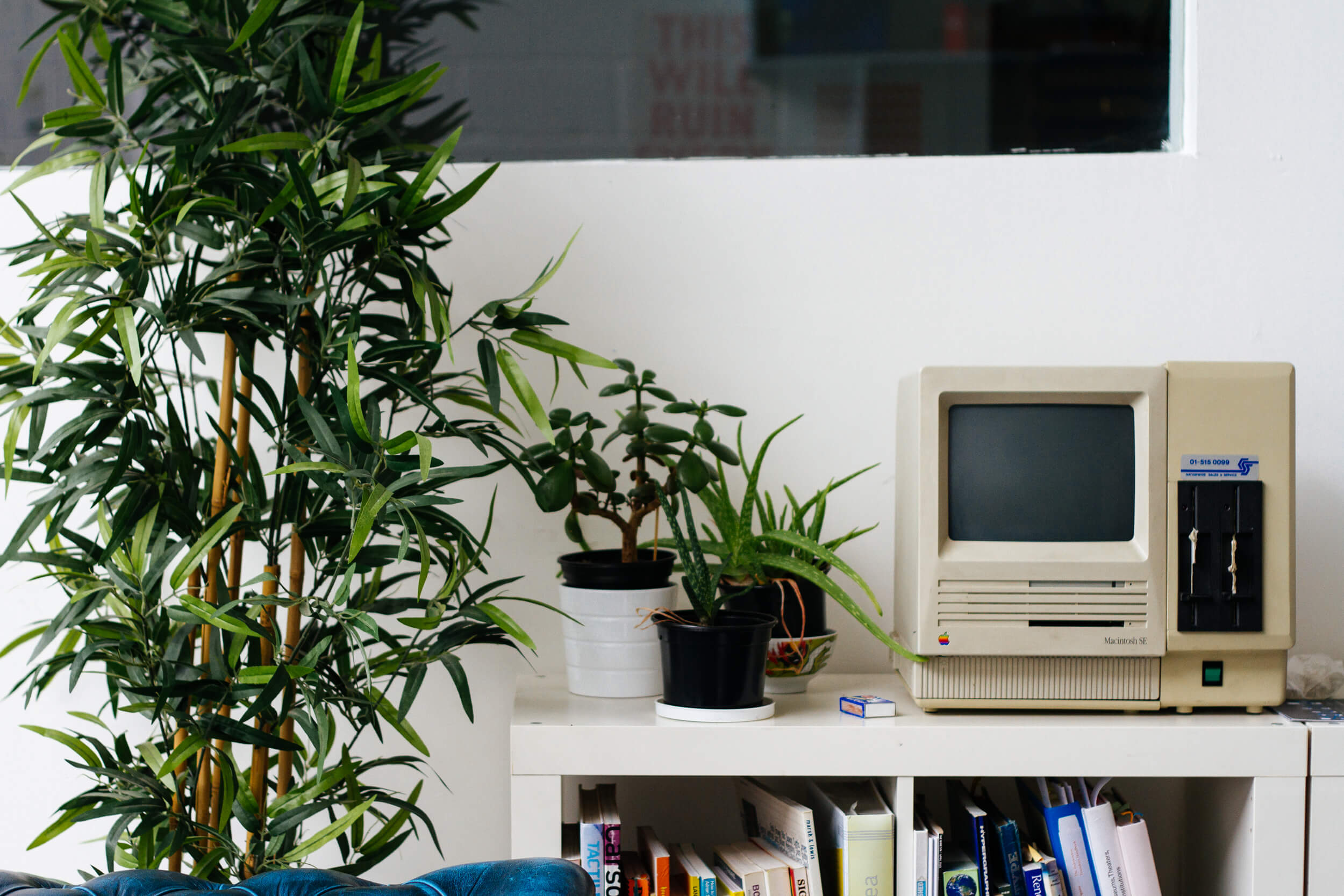 The studio’s founders, James Gilchrist and Beth Wilson worked together to celebrate something unique to Scotland “aside from the rolling hills, friendly people and volatile weather”. Their design responds to VisitScotland’s key message about the Year of Innovation, Architecture and Design 2016.

“Scotland has been changing the world as we know it for centuries, one innovation at a time. From the wheels on your car and the tarmac they drive on, to the telephone, television and much more – all this was possible thanks to Scottish ingenuity.” – VisitScotland

James and Beth chose their ‘nummer wans’ carefully, “Included in the poster are things we found interesting, inspiring, surprising or humorous. We are proud of all of them, from square sausage to sulfuric acid. Although we couldn’t justify Susan Boyle as an invention, a discovery, innovation or design, she is in our hearts and minds.”

“As the work we do is predominantly service-based, what made the Local Heroes commission interesting for us was the opportunity to retain an element of our own personal taste.” Conventionally Warriors Studio design posters promoting events, brands, companies and products, so creating a poster which is essentially a piece of artwork was a challenge. “We recognised that it was essential to design something which people would be genuinely interested in, could personally connect with and would consider aesthetically pleasing which also represented Scotland’s Year of Innovation, Architecture and Design.”

Describing the design process the designers said, “We’re big fans of independent Swiss type foundry, Grilli Type, so we set the ‘nummer wans’ in GT Haptik, a monolinear geometric grotesque typeface, then combined GT Haptik, with the ‘1’ from Benoît Bodhuin’s ZIGZAG, an experimental and playful font to juxtapose the two lettering styles.”

“Within our work we often combine cleanliness and structure with playfulness and chaos, which you can see in the friction between the rigid, almost architectural typographic layout and free ‘dancing’ number one to reflect the variety in content. We are proud of Scotland’s nummer wans and we hope you are too!”

Warriors Studio is a graphic and communication design agency  working with companies, organisations and individuals across the cultural, private and public sectors. The studio works locally and internationally with clients including Warner Music, Urban Outfitters, ICON Magazine, TEDx and the British Council. Their work has been featured by STV News, It’s Nice That, Creative Review, Grafik, Computer Arts, The Drum, ICON Magazine, Étapes and  the  American Institute for Graphic Arts.

The studio was founded by James Gilchrist and Beth Wilson through a shared passion for powerful communication and design and was most recently joined by Victoria Donnelly, an Edinburgh College of Art graduate, who brings fresh ideas and colourful shirts to the mix.